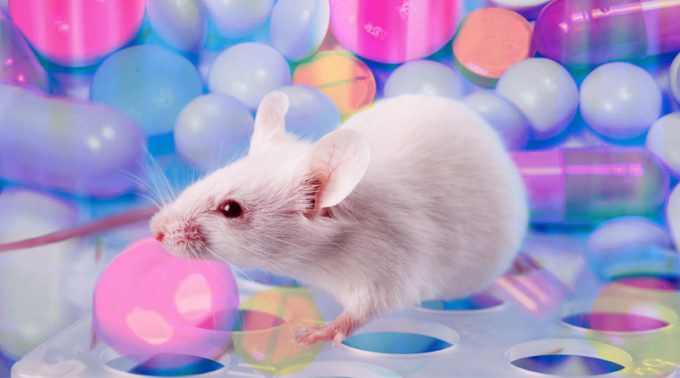 This month, animal models have helped make amazing discoveries in new published studies. We’ve summarized some of the top stories for you to read all in one place.

Scientists have previously established that depression, obesity, and chronic pain all have a connection through the FK506-binding protein 51 (FKBP51). However, a new study in mice has revealed that blocking this protein can potentially relieve all of these conditions. Previous studies have attempted to target FKBP51, but it has been difficult due to structural similarities with its close protein cousin FKBP52, which has opposing effects in cells. FKBP51, found in the brain, muscles, and fat tissue, plays a role in responding to stress and storing fat in the body, making it a desired therapeutic target for related diseases. In this new study, researchers found that FKBP1 can change its shape in a different way than FKBP52. Thus, they were able to develop a highly selective inhibitor, known as SAFit2, to block FKBP51. They then observed that mice were better able to navigate stressful situations, resist diet-induced weight gain, and respond positively to antidepressants. Before determining the full potential of this FKBP1 inhibitor, the research team is investigating how it can be used to treat the above-mentioned conditions, as well as implications in cancer and alcoholism.

Mouse Models Used To Explain Why MDMA Can Treat PTSD

A team of scientists at Johns Hopkins University may have found the reason why MDMA, or ecstasy, is effective in increasing sociability in patients with post-traumatic stress disorder. Using mice, they conducted a study with this psychoactive drug to investigate if a “critical period,” when mice learned that socializing can be rewarding, could be opened up at a later time in life in order to strengthen relationships.

Scientists set up enclosures with two different types of bedding. Mice were first placed in one enclosure together with other mice, and then placed in the other enclosure with different bedding by themselves. When allowed to roam between the enclosures, mice chose to go to the bedding they associated with companionship. The thought was that social reward learning and bonding was occurring as more time was spent in the enclosure with companions. It was found that there was a “critical period” of social reward learning and bonding at puberty that waned at adulthood. To see if the critical period could be reopened at a later time, scientists administered MDMA to adult mice and placed them back into an enclosure with other mice. Compared to the control mice, the adults that had received MDMA exhibited social behavior similar to that of juveniles, suggesting that MDMA changed the brain by reopening the critical period in the adult mice, allowing them to socialize more.

Because the mice in this study were able to re-experience social reward learning, it shines some light on why MDMA is an effective treatment for PTSD. A strong bond between a therapist and their patient has been shown to be important for effective treatment. If MDMA reopens the critical period for social reward learning and bonding in humans similar to what was seen in mice, it could explain why ecstasy helps patients with PTSD, potentially by strengthening the bond between therapist and patient. However, this study implies that the psychoactive drug may only have these effects when used in a social setting, so more research is needed to figure out the best way to administer MDMA in the future.

The study, published in Nature, is available here.

Male babies born with “bubble boy” disease, formally known as X-linked severe combined immunodeficiency (SCID-X1), have no immune cells in their body. This disease, which affects about 1 in 50,000 births, is caused by a debilitating mutation in the ILR2 gamma gene and if left untreated can result in death within the first year of life. To investigate a new treatment, Stanford University researchers used CRISPR/Cas9 to edit the mutant ILR2 gamma gene in cells from patients afflicted with SCID-X1. After injecting the cells containing the edited gene into mice, they observed that the mice behaved normally and were able to produce immune cells on their own. These cells also exhibited “stemness,” which means that they were capable of producing new cells in the future. Further analysis confirmed that editing the ILR2 gamma gene did not result in any off-target effects.

If this treatment continues to develop over the next few years, it may be able to replace the default treatment for SCID-X1, which is a bone marrow transplant. This procedure proves difficult due to the complications associated with finding a donor as well as the actual operation itself.

The paper was published in Nature Communications.