A knockin mouse (KI mouse) has an element inserted into a specific locus in the genome. This can be accomplished with several strategies, including the use of the CRISPR/Cas9 system.

No design is out of reach.

From single point mutations to the most intricate designs ingenious has delivered custom knockin mice again and again for 20 years. With a complete toolkit of different approaches and an experienced scientific staff, there is no knockin design that is out of reach. Contact us today to discuss the custom knockin mouse model your lab will use for years to come.

Custom Knockins For Your Research

What are knockin mice?

To create a knockin mouse, a DNA construct must be made with the insert sequence flanked on both sides by sequences from the mouse genome. The flanking sequences target the insertion to the desired location by inducing homologous recombination. The knockin mice method is different from classic pronuclear injection transgenesis, where genes are inserted randomly into the mouse genome. 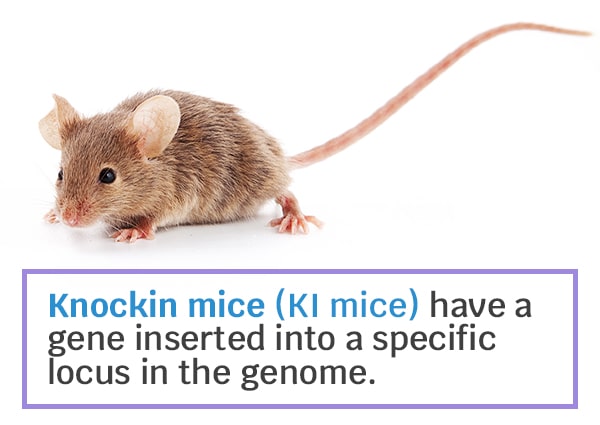 DNA can be introduced directly into mouse embryos or embryonic stem cells and will integrate at a low frequency, creating transgenic embryos or cells. Variations on this technique, including the use of the CRISPR/Cas9 system, increase the frequency of integration and can enable creation of targeted transgenic mice lines.

What do I need to consider when creating a knockin mouse?

When thinking about a design for a new knockin mouse model, you should first check and see if your desired model already exists. Once you’ve looked through several online databases and determined that the model you need is not already available, you will have to decide if your experiment calls for random or targeted insertion. Here at ingenious, we specialize in targeted insertion, which will give your knockin mouse the predictability you may be seeking. While random insertion is usually available at a lower cost, it requires extra validation on your end to determine the exact location where the transgene was inserted. This may also make it difficult to evaluate if it’s an accurate knockin mouse model of the disease and gene you are studying. That’s why targeted transgenic mice are often the model of choice when studying specific mutations and diseases.

One other consideration to keep in mind is whether the knockin may or may not be lethal to the mouse. Fortunately, there’s a way to get around this. By making your knockin conditional, you have the ability to turn the mutation on when you need to observe it. This can be achieved with tissue specific or temporal control. In addition to targeted transgenics, ingenious is capable of creating conditional knockin mice as well.

To prepare for your experiment, you may also want to consider creating a breeding plan before you receive your mice. ingenious makes this easy with our very own, free Breeding Planner. Preparing for colony management ahead of time can help you make the most out of your new knockin mouse line.

For more information, see our guide “3 Things I Wish I Knew Before Making My First Knockin Mouse Model.” If you are still unsure of what type of strategy may be the best fit for your new knockin mouse model, please contact us and one of our scientific consultants will be in touch with you to discuss your research project.

The mice were delivered on time, as billed!