Let’s say your reviewers would like you to confirm the results of your recent in vitro experiments in an animal model in order to publish your most recent paper or fund your grant proposal. Or maybe you’ve exhausted your in vitro testing capabilities to investigate your current hypothesis and it’s time to embark on studies in live animals. Or are you a researcher that frequently works with transgenic animal models, but the models have always been readily available, and now you need to create something specifically designed for your research goals?

We get it. Transgenic animal model technology can at first seem intimidating, but it doesn’t have to be. For over 20 years, ingenious targeting laboratory has been a leader in custom animal model generation, and has provided quality transgenic mouse, rat and rabbit models for thousands of research studies. Whether you are new to the transgenic model field or you have decades of experience, our helpful, knowledgeable team can guide you through the process of animal model development based on your unique experimental goals. It is our job to demystify the science and offer solutions you never thought possible.

1) What are animal models used for?

Animal models are used for a variety of purposes, including production of recombinant proteins, pharmaceutical and consumer products, and tissue implants. In biomedical research, animal models are primarily used in experiments to learn about the anatomy, genetics and physiology of humans without putting human life at risk. Smaller animal models that can be easily housed make experimental conditions easier to control and can be used in quantities necessary to sufficiently power research studies. Because animals don’t often suffer the same genetic diseases humans do, researchers must replicate these disease states in animal models to reveal the causative mechanism of the disease, and hopefully, develop effective therapies or even a cure.

There are two basic approaches when replicating human genetic disease in animal models: directed and nondirected [1]. The nondirected approach induces genome-wide mutations utilizing chemicals and radiation, and the resulting animals are screened for characteristics that resemble those of known human diseases. The directed approach instead uses established gene mutations and aims to replicate that mutation directly in the model organism, whether by single gene knockout (rendering a gene nonfunctional), single gene knockin (adding a transgene, or foreign DNA, into the organism at a specific locus), conditional expression of single gene knockouts or knockins (an “on” or “off” switch for the desired mutation), transgenesis (random integration of foreign DNA into the genome of another organism), or chromosomal rearrangement. Here at ingenious, we specialize in directed approaches to efficiently generate transgenic animal models and guide our customers through every step of the process.

2) How do you create a transgenic animal model?

3) What was the first transgenic animal? 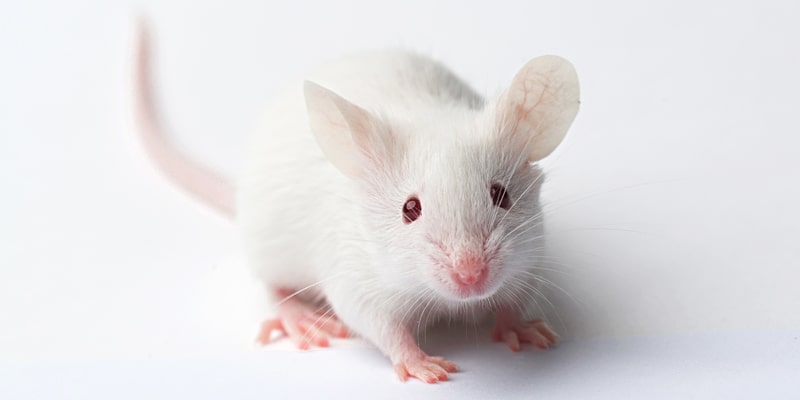 The very first transgenic animal was created back in 1974, when Rudolf Jaenisch generated the first transgenic mouse by injecting foreign DNA into an early mouse embryo. Eight years later, transgenes would be inserted in the germline of transgenic mice that could be passed onto future generations. In 1984, the very first oncomouse was produced by inserting the Myc oncogene into the mouse genome to predispose tumor growth in the animal. This transgenic animal model of cancer revolutionized the field of biomedical research and paved the way for an explosion in the scientific understanding of disease and disease treatment.

4) Why do researchers use mouse models for studying human genes?

Mice and humans are physiologically quite similar, and the mouse’s small size and large breeding capacity make them an excellent animal model for studying the function of mouse genes and their orthologous (equivalent) human gene counterparts. While mice and humans are phylogenetically related, a large number of evolutionary differences have accumulated between our two species, a factor researchers must keep in mind when extrapolating the results of genetic experiments in mice to humans. Use of mouse models has greatly advanced our understanding of physiology in both health and disease, paving the way for therapeutic drug development and safer clinical trials for disease therapies and cures.

5) What are some animal models that have been used to study genetics?

Mice, nematode worms (Caenorhabditis elegans) and fruit flies (Drosophila species) are historically the most commonly used animal models to study genetics. Scientists study genetics by experimentally manipulating the genes of model organisms in order to better understand the function of genes in vivo. Because genetic studies require a large number of progeny (offspring) to assess rules of inheritance, animal models that are small, mature quickly, and produce many offspring are ideal. The more phylogenetically related a model organism is to humans, the more confident we can be in the conservation of orthologous gene function in humans. Given their phylogenetic relationship to humans, mice, rats and rabbits are among the most commonly used model organisms used in genetics research today. ingenious targeting laboratory specializes in generating the customized transgenic mouse, rat and rabbit models required for today’s complex genetic studies and can assist researchers in developing conditional transgenic animal models for transgenes that inhibit normal development of offspring in utero.

“I worked with ITL on the generation of a conditional knockout mouse strain for a complex gene. I have been very impressed by their flexibility and their efficiency in completing […]