Control where and when your gene of interest is knocked out with a conditional knockout mouse model from ingenious. When you receive your new conditional line, it can be used in conjunction with hundreds of existing Cre lines for precise regulation.

Generating one mouse line with the potential for producing multiple derivative mouse models is a great way to save time and money. A tissue-specific knockout mouse defines an animal model in which a gene of interest is “floxed” and thus inactivatable in specific cell types in a certain tissue. Other cell types and tissues exhibit an unmodified, functional gene expression. This gene inactivation is achieved by an additional breeding step with a tissue- or cell type-specific Cre-deleter mouse line. Such models also give access to whole body knockouts.

A knockout-first mouse model – with or without a reporter – can be used in gene rescue experiments and can also include conditional knockout potential. The KO-first allele overcomes the limitations of constitutively-expressed mutations, flexibly producing reporter knockouts, conditional knockouts, and null alleles through exposure to site-specific cyclization recombination (Cre) and flippase (FLP) recombinases – such as in crosses to FLP and Cre mice.

To address the critical need of researchers to verify the loxP-mediated recombination of their conditional knockout models, and to do so in a reliable manner without increasing timelines, ingenious has developed the TruView Conditional Knockout™ system.

It is now possible to switch gene expression multiple times, in a single mouse model. Our conditional+reversible design gives you the control you need for more complex experiments. 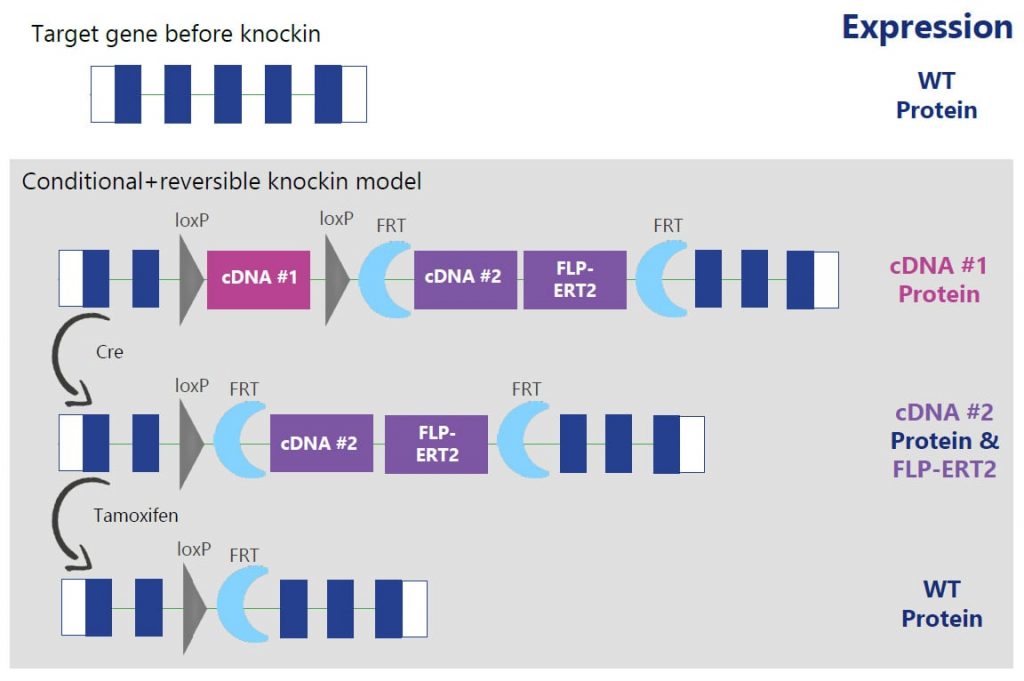 With a conditional knockout line from ingenious, you can control where knockout occurs by crossing it with a recombinase-expressing line, available in repositories. Cre recombinase is the enzyme most commonly used for conditional genetic rearrangements. It recognizes specific sequences known as lox sequences, e.g. loxP. Other recombinase/recognition sequence pairs are also used such as FLP/FRT and Dre/rox.

A conditional approach limits the knockout to your tissue of interest, avoiding potential embryonic lethality from constitutive knockout. Using Cre lines with drug-inducible activity expands your options to include temporal control of your knockout. There are many Cre’s to choose from such as tissue specific, inducible, and ingenious’ own Split-Cre for generating lines that are not currently available. The placement of loxP sites can be tricky when considering promoter and regulatory regions, ingenious experts can help alleviate this concern. Contact us today and our experienced scientists will analyze your gene of interest and develop a targeting strategy that is perfect for your research.

New technologies can enhance the utility of your conditional knockout (cKO) line.

ingenious’ proprietary TruView Conditional Knockout™ system can activate expression of a reporter gene in cells where your gene is knocked out independent of native gene promoter activity.

Enhance your conditional model by adding a reporter to label affected cells, and for visualizing where your gene has been knocked out on the cellular level. 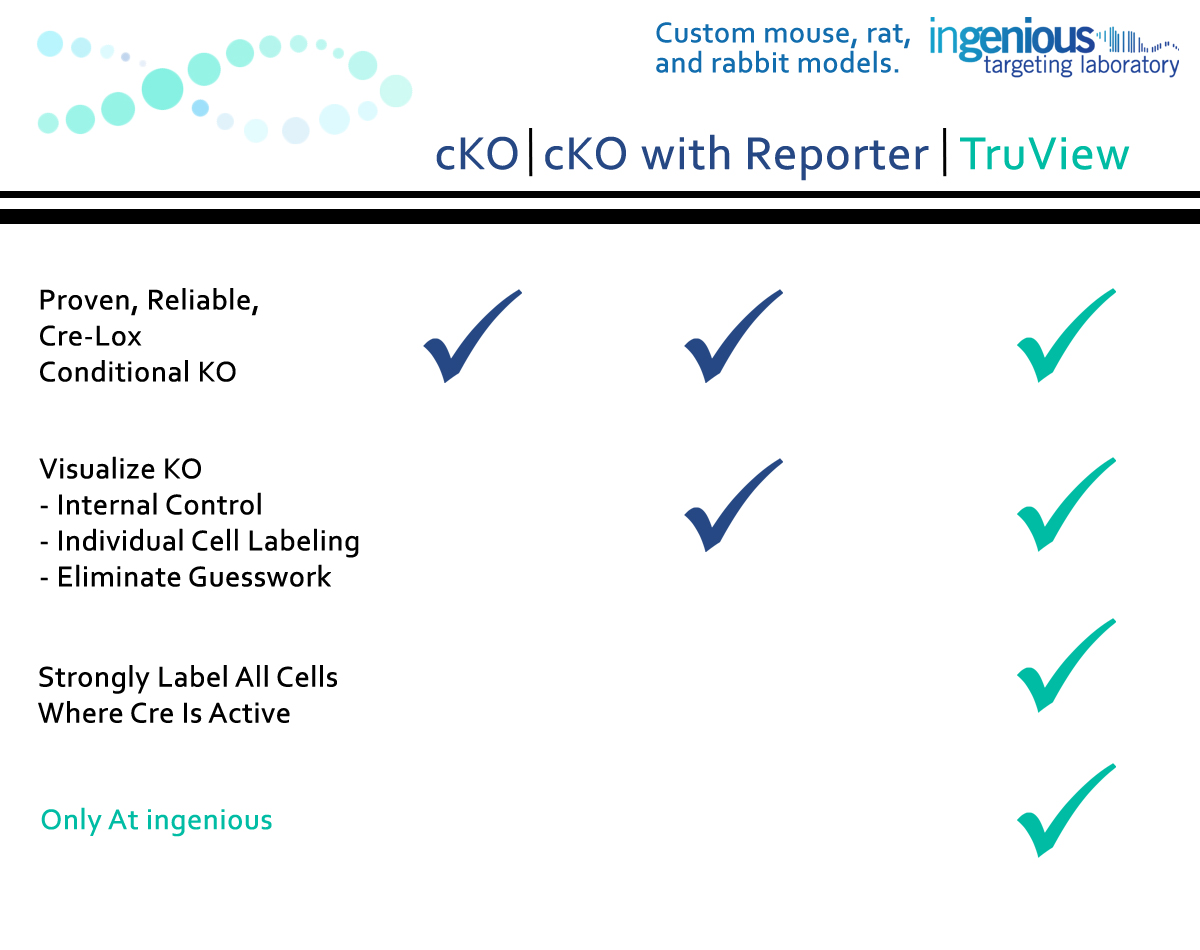 Published in Nature, a client examined the effects of the TAM receptor tyrosine kinases Mer and Axl on regulating microglia in the central nervous system, using a custom conditional knockout mouse model generated by ingenious. Through the use of this cKO mouse, our client was able to determine that TAM receptors play a significant role in how microglia regularly clears dead brain cells and responds to brain damage. This study has identified TAM receptors as possible targets to prevent the development of central nervous system (CNS) disease, as well as Parkinson’s disease.

For this project, ingenious used iTL C57Bl/6 ES cells to design a Mertkfl/fl cKO mouse line. By targeting and deleting exon 17, it was possible to introduce a frame shift, which resulted in a Mer protein null38. To remove the Neo cassette, this conditional knockout mouse model line was crossed with C57Bl/6 mice, via Flp-mediated recombination.

Phosphatidylinositide-3-kinases (PI3Ks) play important intracellular signaling roles in immune cells, with over-activation of PI3K leading to cancer and autoimmune disease. PI3K-interacting protein-1 (PIK3IP1/TrIP) is a T-cell transmembrane protein proposed to regulate PI3K. Using a conditional TrIP mouse model created by ingenious, the lab of Lawrence P. Kane at the University of Pittsburgh showed that TrIP knockout enhances T cell activation via the PI3K pathway, uncovering TrIP as an inhibitor of PI3K and placing TrIP as a novel target for immune modulation.

A conditional knockout (cKO) mouse model by ingenious was used to investigate the function, role, and necessity of DCAF17 in cellular processes. More specifically, our client studied how the deletion of Dcaf17 in different tissues can affect several processes in vivo. They found that while female fertility was unaffected by this disruption, it impacted normal sperm development, resulting in male infertility. This suggests that DCAF17 plays a crucial role in spermiogenesis. To create a conditional Dcaf17 knockout model for this study, exon 4 was used as the target and electroporated into hybrid ES cells by ingenious scientists.

To study the previously unknown role of MICU1 (Mitochondrial Calcium Uptake 1), a client used a conditional knockout (cKO) mouse generated by ingenious targeting laboratory. It had been previously established that MICU1 controls mitochondrial Ca(2+) uptake. Because knocking out MICU1 in all tissues can be lethal, ingenious created a cKO mouse by using the Cre-lox system to target and knock out exon 3 of the MICU1 gene. With this mouse, our client was able to conclude that MICU1 is essential for tissue repair, as its absence can cause necrosis and prevent liver regeneration. It was also discovered in this study that a whole body knockout of MICU1 results in lethality in newly born pups.

Because CHD8 mutations play a role in the development of autism spectrum disorder (ASD) as a high risk factor, a client generated a conditional knockout (cKO) mouse model with ingenious targeting laboratory to examine the Chd8 gene. To target the gene, ingenious scientists inserted a loxP/FRT-PGK-gb2-Neo cassette at exon 3, as well as an additional loxP site with a Bcll restriction site. After linearizing the construct with Notl digestion, it was electroporated into C57BL/6 ES cells. The resulting clones were injected into Balb/c blastocysts to produe chimeras, which were then bred with FLpe deleter mice to create Chd8flox/+ mice. These mice were then crossed with β-actinCre mice to produce β-actinCre;Chd8+/−. In order to remove the Cre transgene and generate a Chd8+/− conditional knockout line, they were bred with C57BL/6J mice.

By using this cKO mouse, our client was able to observe that Chd8+/− mice experienced anomalies in brain development and long-range brain wiring, resulting in brain over-connectivity. This over-connectivity can be linked to symptoms of ASD, suggesting that Chd8 plays a role in a form of the disorder. 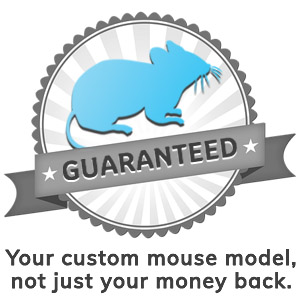